Q1. What do you mean by the age-sex pyramid?
Ans: Age-sex pyramid is a graphical representation of the age, sex composition of the population. It is also known as the Population Pyramid.

Q2. Define Census.
Ans: The official collection of population data by all means is known as Census. This is conducted once in ten years. Currently, we are following 2011 census. In 1872, first population census of India was conducted. The Census of India 2011 is the fifteenth census starting from1872 and the seventh since independence.

Q3. Define the following:        (a) Birth Rate        (b) Death Rate        (c) Natural Growth Rate
(d) Density of Population        (e) Migrations
Ans: (a) Birth Rate: The number of live births per 1000 persons is called birth rate.
(b) Death Rate: The number of deaths per 1000 persons is called death rate.
(c) Natural Growth Rate: Births and deaths are the natural causes of population change. The difference between the birth rate and the death rate of a country is called the natural growth rate.
(d) Density of Population: Population density is the number of people living in a unit area of the earth's surface. It is normally expressed as per square km. The average density of population in the whole world is 51 persons per square km.
(e) Migrations: Movement of people from one place to another; in search of livelihood is called migration. Migration can be classified into two:
(i) Emigrants are people who leave a country.
(ii) Immigrants are those who arrive in a country.

Q5. What is age structure or age composition?
Ans: Number of people in different age groups in country is called age structure or age composition of the population. Population of a nation is generally grouped into three broad categories:
(a) Children (Below 15 years of age): Economically unproductive and needs to be provided with the necessities of life (food, cloth, education, etc.)
(b) Working age (15 – 59 years): Economically and biologically productive
(c) Aged (Above 59 years of age): They can be economically productive even after retirement.

Q7. Discuss the importance of human resource.
Ans: Human resource or people are a nation's greatest resource; they are an asset to a nation. People are important to develop the economy and society. It is people with their demands and abilities that turn a thing into 'resources'. Human beings use their knowledge and skill to convert natural resource into more valuable goods. Hence, human resource is the ultimate resource. Healthy, educated and motivated people develop resources as per their requirements. Human resources like other resources are not equally distributed over the world.

Q8. How would you distinguish between productive and dependent population?
Ans:

Q9. Compare the population pyramid of India and Japan. Draw your inferences.
Ans:

Q10. Some regions in India experiencing a steep decline in the sex-ratio. It is unhealthy for the society. Find out reasons and suggest ways to check it.
Ans: Number of female per 1000 male population is called sex ratio. The sex ratio in 2001 was 933 and in 2011 in were 940. Kerala has the best sex ratio (1084); while Sex ration in Gujarat is 919, Haryana (879) and Delhi (868) have the worst sex ratios.
Steep decline in the sex-ratio is a serious threat to the nation. Following are some of the reasons of decline in the sex-ratio:
(a) Girls in India are taken as a liability, one day she will get married and leave the house; Parents have to pay a huge dowry.
(b) Safety and security is a great concern for family.
(c) India is a male dominated country.
(d) Female Feticide, girl child are killed before her birth.
(e) Females often face Malnutrition, leading to ill health.

Steps that can be taken to improve the sex-ratio in India:
(a) People should be educated. Every Indian should change their mindset. Girls are not burden but they are the blessings of the almighty.
(b) Equal rights to male and females.
(c) Female Feticide should be completely banned.
(d) Education for girls.
(e) Nutritious food to be provided.
(f) Every male should respect females in all aspects.
(g) Government of India should take serious steps for the overall development of females.

(b) Industry: Industry refers to an economic activity that is concerned with the production of goods, extraction of minerals or the provision of services.

Q8. Discuss the locational advantages for the development of the cotton textile industry in Ahmedabad.
Ans: Following are the locational advantages for the development of cotton textile industry in Ahmedabad:
(a) Located in Gujarat on the banks of the Sabarmati River.
(b) Situated very close to cotton growing area. Raw material is easy availability.
(c) The climate is ideal for spinning and weaving.
(d) The flat terrain and easy availability of land is suitable for the establishment of the mills.
(e) The densely populated states of Gujarat and Maharashtra provide both skilled and semi-skilled labour.
(f) Well developed road and railway network permits easy transportation of textiles to different parts of the country, thus providing easy access to the market.
(g) Mumbai and Kandla ports nearby facilitates import of machinery and export of cotton textiles.

Q9. Compare and contrast the development of the iron and steel industry in Pittsburgh and in Jamshedpur.
Ans: Iron and Steel Industry in Pittsburgh:
(a) Pittsburgh is an important steel city of the United States of America. City is also known as "Iron City"
(b) In mid 19th century processing of Iron began in Pittsburgh.
(c) Some of the raw material such as coal is available locally, while the iron ore comes from the iron mines at Minnesota, about 1500 km from Pittsburgh. Between these mines and Pittsburgh is one of the world's best routes for shipping ore cheaply – the famous Great Lakes waterway. Trains carry the ore from the Great Lakes to the Pittsburgh area.
(d) The Ohio, the Monongahela and Allegheny rivers provide adequate water supply.
(e) Pittsburgh has a favourable topography, temperate climate, skilled labour and market, which make this place favourable for the development of Iron & Steel industry.

Iron and Steel Industry in Jamshedpur:
(a) Before 1947, there was only one iron and steel plant in the country – Tata Iron and Steel Company Limited (TISCO).
(b) TISCO was started in 1907 by Jamshedji N. Tata at Sakchi in the Singhbhum district of Jharkhand, but the production started in 1910. Later on Sakchi was renamed as Jamshedpur.
(c) Sakchi was only 32 km away from Kalimati station on the Bengal-Nagpur railway line. It was close to the iron ore, coal and manganese deposits as well as to Kolkata, which provided a large market. TISCO gets coal from Jharia coalfields, and iron ore, limestone, dolomite and manganese from Orissa and Chhattisgarh.
(d) The Kharkai and Subarnarekha rivers ensured sufficient water supply.
(e) Government initiatives lead to rapid industrial growth in India.

Q10. Draw a flow chart to explain the classification of industries.
Ans: 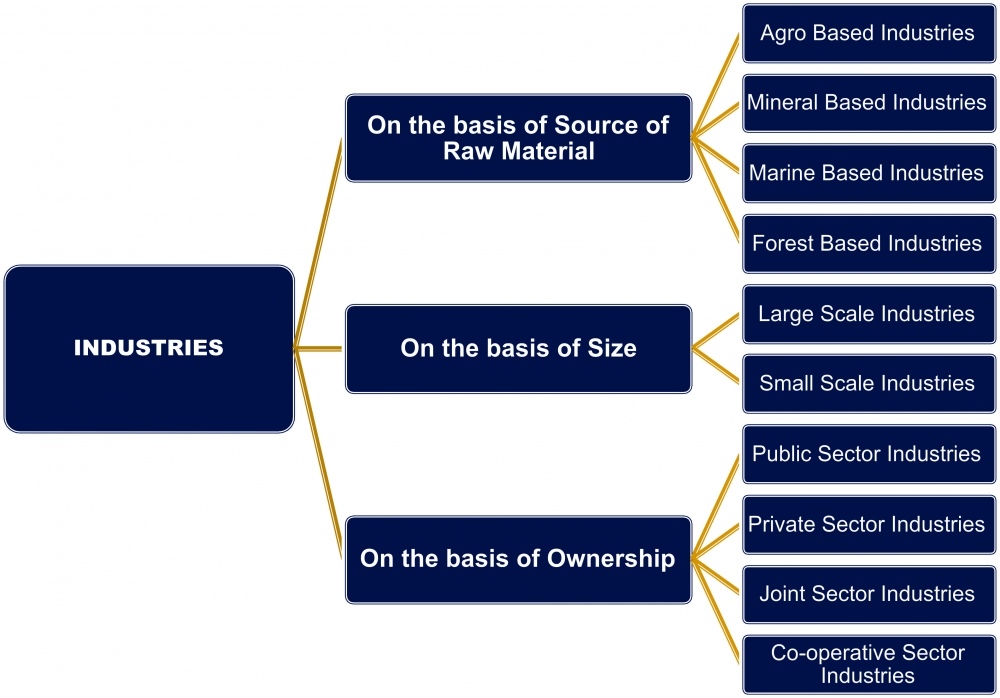 6. Out of the following which is not a cropping season of India?
(a) Zaid
(b) Kharif
(c) Kaffir
(d) Rabi

11. Seasonal migration of people with their animals is called
(a) Farmers
(b) Jhumming
(c) Transhumance
(d) Labours

13. Factors Influencing the Crop Cultivation:
(a) Temperature
(b) Fertile Soil
(c) Rainfall
(d) All of these

14. Growing vegetables, flowers, fruits and decorative plants for commercial use is known as
(a) Viticulture
(b) Horticulture
(c) Sericulture
(d) Pisciculture